It was an awkward lunch. We didn’t know quite what to say, and so my parents and I talked about the weather, my roommates, and their parents whom we had just met. Ben, the drummer from Hackensack whose mother worked in publishing in New York City. Justin from Staten Island. His father owned a billboard company, and he would regale us with stories of all the mafia families who lived in his neighborhood. Barry, with whom I played video games (Barry, if you’re reading this, I could still take you in RBI Baseball), listening to Pearl Jam and Nirvana, when I should have been studying.

We loaded all my worldly possessions into our car trunk: clothes, CD collection, ramen noodles, a pillow with those little arms on the side that I never used.

My parents had packed a picnic, which we spread out on a table near the dorm. The space between us was heavy with the unsaid as much as the said. I was their first child to go off to college and could tell that they were having a hard time with this transition.

I, like them, had mixed feelings. A part of me was ready for more independence. No one could tell me what time to come home. I could eat whatever I wanted, whenever I wanted. I got to decide which classes to take. I could finally live life on my terms (as long as my parents were paying the bills). The prospect of this new freedom was exciting for me.

But I was also apprehensive. Making new friends daunted me. I wondered if I had the brains to succeed in college—maybe getting through high school was just a fluke. I had no idea what subject in which to major. Would I meet my wife in college, or at least have a girlfriend? Should I join a fraternity? The horizon seemed overwhelmingly uncertain, and I while I never admitted it at the time, my stomach was in knots during that lunch.

I wonder if the horizon seemed overwhelmingly uncertain to Jesus’ disciples after his ascension to the Father’s right hand. Were their stomachs knotted up with apprehension? I feel like I have a good grasp of the significance of Jesus’ Incarnation, his earthly ministry, his Crucifixion and Resurrection. The gift of the Holy Spirit at Pentecost is vivid and meaningful to me. However, I’ve always struggled to understand the significance of his Ascension.

Just before his Ascension, Jesus tells his friends: “You will receive power when the Holy Spirit has come upon you; and you will be my witnesses in Jerusalem, in all Judea and Samaria, and to the ends of the earth.’ When he had said this, as they were watching, he was lifted up, and a cloud took him out of their sight.” (Acts 1:8-9)

I suspect that between the Ascension and Pentecost, there were some awkward meals, the space between the apostles filled as much with the unsaid as with the said. Will the Romans nail us to a cross like Jesus? Even if we receive the promised Holy Spirit, will that be enough to spread the Gospel in a world that is so often deaf to the Good News? The horizon is overwhelmingly uncertain for these followers of Jesus, who has disappeared from sight in order to be present in a new capacity to God’s people, a way that isn’t bound by time or place.

To re-imagine a phrase from Hannah Arendt: Jesus ceased to be everything so that his disciples could become something. That, to me, gets to the heart of the Ascension. Jesus ascends to the Father so that we can have the freedom and space to become the person God made us to be. That’s what my parents were doing when they dropped me off at college. They loved me enough to let me go, just like Jesus loved his friends enough to let them go.

It’s helpful for us, in this season of graduations and other transitions, to recall that Jesus doesn’t leave his disciples comfortless. He promises them the gift of the Holy Spirit, the abiding presence of God, the substance of which flows from the mutual love of Father and Son.

Last Sunday, as I listened to the profound sermons given by St. John’s graduates during our Baccalaureate Sunday services, I sensed God’s abiding presence with them and the whole congregation. I’ve witnessed these young people, including my own son, Danny, growing up. While my heart was breaking as they processed up the center aisle of the church in caps and gowns, it was also full to overflowing with love and gratitude. 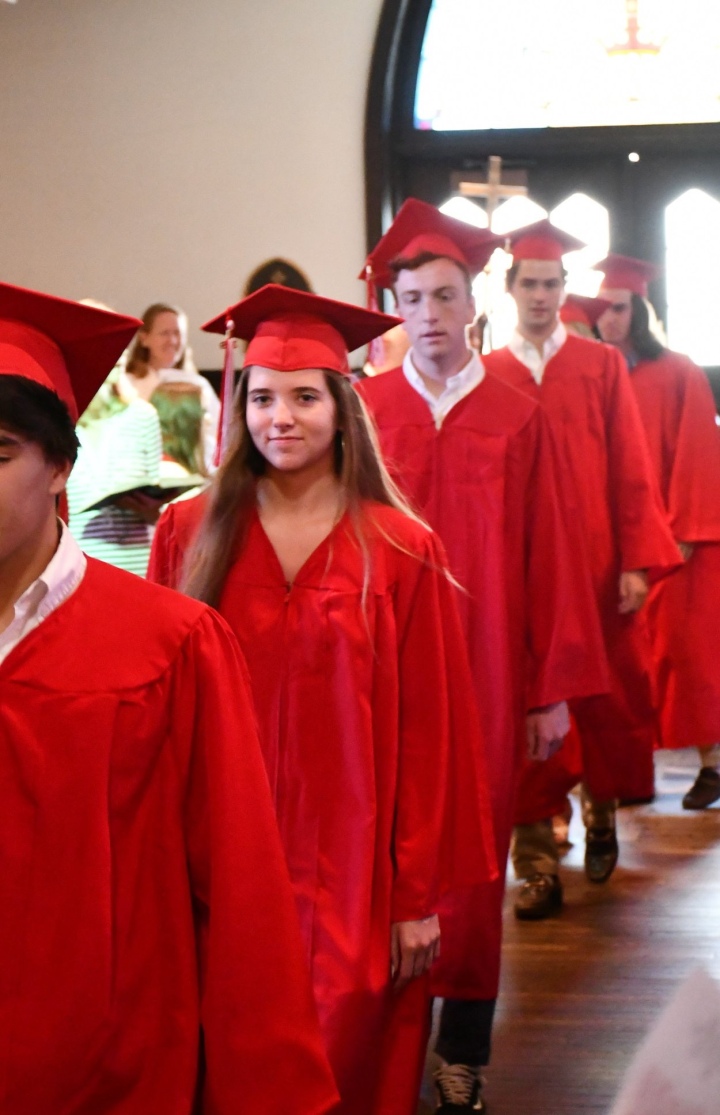 Their family and friends, including their church family, now cease to be everything so that they can become the someone that God made them to be. Love has the courage to let go. God has been the wind at their backs, is the one who walks by their side right now, and will be the abiding presence who has gone ahead to prepare a future for them filled with hope.

2 thoughts on “Love Has the Courage to Let Go”

Many of the “Talk of the Town” essays in the New Yorker begin “A friend writes . . .” That phrase has stuck with me through the years. It assumes a closeness between writer and reader, a friendship in which people desire the best for each other.

It’s in that spirit that I compose my blog. In writing this, I hope that in some small way my words will move, interest, and edify you, whom I consider a friend.