Our sons (and the Holy Spirit) were right: Hawaii was the perfect sabbatical destination for our whole family. We ascended Mauna Kea, a volcano down which people snow ski, yes, snow ski in Hawaii, only to go to the beach later that same day. The peak  is at more than 13,000 ft., accessible only by 4-wheel-drive vehicle. Since we had a minivan, we played it safe–cue groans of disappointment from our sons–and stayed at 9,000 ft. at the Visitor Center. The stars that night were absolutely stunning. It was like being in a planetarium on steroids. This is the area that is home to the finest astronomical observatories in the world. While there, the words of the prophet Amos came to mind:

Seek him who made the Pleiades and Orion, and turns deep darkness into the morning, and darkens the day into night; who calls for the waters of the sea and pours them out upon the surface of the earth. The Lord is his name. (5:8)

Other peaks included the Waimea Canyon (think Grand Canyon in Hawaii) and the Na Pali Coast on the island of Kauai. This was our view from a hike that turned into a wonderfully muddy quagmire with a lot of slips, falls and laughter at each other’s expense. All that blue meeting the clouds is the Pacific Ocean:

Now for the valleys. I won’t easily forget our mule ride through Waipi’o Valley, a remote area on Hawaii’s Big Island in which many of Hawaii’s former kings are buried. This sacred area is now home to a small community of people who brave a dirt road that descends into the valley at a 25% gradient. We also trekked through lava fields in order to reach this vantage point, where we were truly present at the creation. Here, at Volcano National Park, lava falls into sea, forming new land in real time. 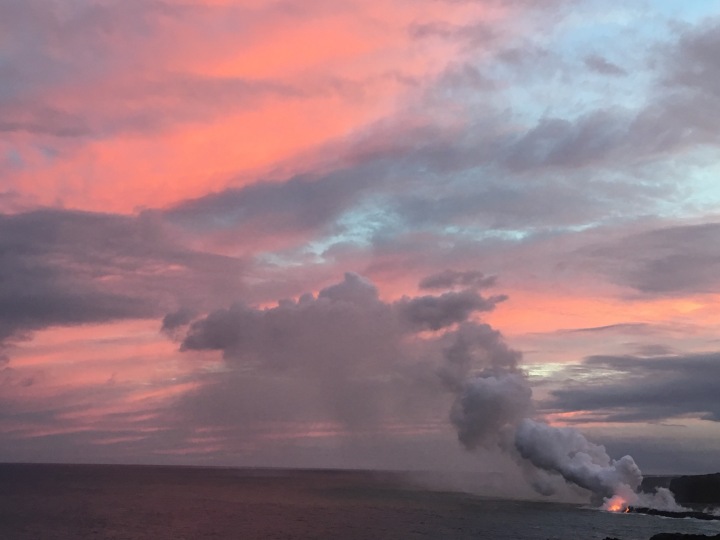 Other highlights: a snorkeling party interrupted by an uninvited guest, an inquisitive tiger shark. Thank God that everyone got back to the boat safely. Hawaiian shave ice and Ahi tuna–I could eat that tuna every day of my life! And don’t forget about surfing (for me, the very first time).

I anticipated that I would be hopelessly bad at surfing. My balance and agility are generally embarrassing, two qualities that are important in surfing. Yet, through God’s grace and good instruction, I managed to catch serveral waves, as did all the Killeens. I was especially proud of Carol, who caught a wave and surfed immediately.

My instructor told me that when the waves were approaching, I was paddling too hard. I needed to relax and just go with the wave more. Think there might be any spiritual take-ways there? Here’s a photo of the Killeens after our lesson in Kona, where the Ironman triathlon is held each year:

Currently, I’m with my extended family in Spring Lake, NJ, after a brief retreat at Holy Cross Monastery in West Park, NY (right across the river from Hyde Park, where FDR’s home and library are located). Early in my ministry, I went for spiritual direction at the monastery with Br. Douglas Brown, who is now deceased. It meant a lot to me to be able to pay my respects and pray at Douglas’s place of burial, a columbarium niche in the monastery’s Founder’s Chapel. Also at the monastery was a large group of Episcopal young adults who were preparing for global missionary service. Their faith and enthusiasm were inspiring.

Spring Lake, also known in New Jersey circles humorously as the Irish Riviera–you will see more redheads on the beach here than anywhere else in the world!–is an old Victorian Jersey-shore town with very little in the way of attractions other than a boardwalk built by the WPA in the 1930s. It’s a special place for our family.

Now that folks live all over the country, it’s the place where we gather. It brings me such joy to see the boys having fun and making memories with their cousins. Last night, we went to the beach and watched several fireworks displays, as many towns along the coast were observing Independence Day.

I spent yesterday reading the Declaration of Independence, as well as David McCullough’s The American Spirit. “We mututally pledge to each other our lives, our fortunes, and our sacred honor . . .” Thank you, Thom. Jefferson! McCullough’s book is just what we need right now–I hope you’ll read it, too.

Next week, I head to a retreat center in Marriottsville, MD, for a seminar on contemplative spirituality for clergy offered by the Shalem Institute. More on this experience next week, which is my last stop before I return home to Tallahassee.

I miss y’all very much and am praying for you daily. This has been the opportunity of a lifetime for which we are so grateful.

Many of the “Talk of the Town” essays in the New Yorker begin “A friend writes . . .” That phrase has stuck with me through the years. It assumes a closeness between writer and reader, a friendship in which people desire the best for each other.

It’s in that spirit that I compose my blog. In writing this, I hope that in some small way my words will move, interest, and edify you, whom I consider a friend.